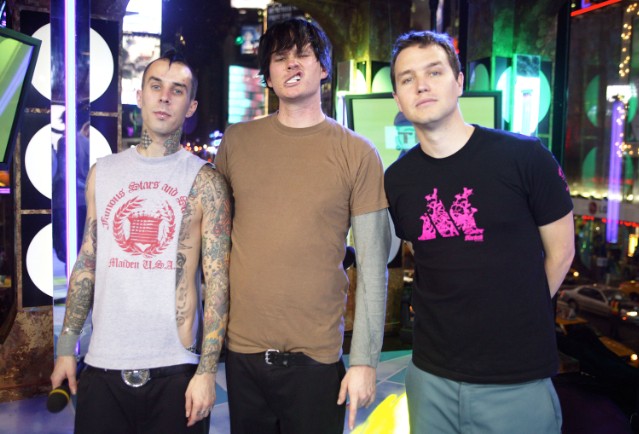 During a revelatory Twitter exchange yesterday, Tom DeLonge explained to late-night host James Corden that his former band Blink-182’s name is pronounced “blink-eighteen-two,” rather than the common pronunciation “blink-one-eighty-two,” and definitely not “blink-one-eight-two,” which, according to Corden’s co-writer Iam Karmel, is how British people say it. This is extremely validating to me personally as someone who maintains belief in a particular theory about the meaning of the band’s name that has long lent a small but satisfying shred of cultural relevance to the lives of teenagers in DeLonge’s hometown of Poway, California, where I grew up.

Allow me to explain: DeLonge and Blink’s co-founder Mark Hoppus have for years responded to questions about the name’s origins with a variety of joke answers, collected self-satisfyingly in a sidebar in the band’s 2001 book Blink-182: Tales From Beneath Your Mom. Explanations of “182” include the number of times Al Pacino’s character Tony Montana says “fuck” in Scarface, the number of the ship on which Hoppus’s grandfather served in the Marines, and Hoppus’s ideal weight. Ultimately, though, the book claims that the number is meaningless. The band was first christened Duck Tape, then simply Blink. They added the digits after Cheshire Cat caught the attention of an Irish band with the same name, who issued a cease-and-desist. In a 2010 interview with Amy Schumer (who briefly hosted a Fuse show with Hoppus!?), Hoppus says the group chose the number on the spot during a phone call with their record label.

That’s not what kids in Poway grow up learning. To a generation of Powegians, DeLonge, who attended Poway High, served as an odd sort of aspirational hometown hero: a cultural figure who made it out of our rural, conservative San Diego exurb and left a mark, however dumb, on the rest of the country. Two friends road-tripped to Santa Barbara during our senior year for the world premiere of Love, the forgettable 2011 sci-fi film produced and scored by DeLonge’s post-Blink band Angels and Airwaves, and I really couldn’t blame them. My chemistry teacher Mr. Manly proudly shared stories of DeLonge’s classroom pranks.

Poway High’s rival school is Rancho Bernardo High, where DeLonge spent time after being expelled from Poway for showing up drunk to a basketball game. (According to the book, this where he met Scott Raynor, the band’s drummer before Travis Barker, as well as Anne Hoppus, Tom’s short-term girlfriend, who introduced him to Mark.) Rancho Bernardo is the neighboring town and mostly the same as Poway, which made it the perfect target for projected self-hatred. The received knowledge in Poway is that Blink-182 is a euphemism for “Fuck RB,” because R is the alphabet’s eighteenth letter and B is the second. The sidebar in the book even includes the “18 + 2 = R + B = Rancho Bernardo” theory, though it doesn’t offer any interpretation of “blink.” I think we understood it as some obscure ’90s skater slang, but I eventually accepted that probably wasn’t the case, and this story was more lore than fact, something closer to those UFOs with which DeLonge has grown so infatuated.

That is, until Tom shot off yesterday’s tweet. The eighteen-two construction clearly points to the alphabet theory and I will not hear otherwise. The credit owed to Rancho Bernardo’s shittiness is long overdue.

It’s actually— Blink eighteen-two. People have all gotten this wrong for years. Sometimes this can happen with very complex, thoughtful and elevated art.James Corden✔@JKCordenDon’t start this. I admit we are wrong on this. America calls them Blink One eighty two. Which is also wrong. They technically should be called Blink one hundred and eighty two. Don’t take some moral high ground here. https://twitter.com/IanKarmel/status/1064307305267683328 …25.6K6:58 PM – Nov 19, 2018Twitter Ads info and privacy6,982 people are talking about this